Operating Under the Influence: A Summary of the British Brewery Bubble 1885-1913

Technology and policy are often at the heart of financial bubbles. In the 19th century, hot technologies were not Cloud computing and electric cars, it was bicycles, candy bars, and beer. From the years 1885 to 1913, English breweries were suspended in a unique bubble. The features that separate this bubble from others can be for the most part attributed to two major oddities. First, the bubble resulted from unintended consequences of legislation. Second, many of the companies involved were not new businesses; they were long-standing, often family-controlled breweries that incorporated to take on outside shareholders and cash.

Widespread incorporation of the brewery companies was initialized by the temperance movement’s “crackdown” on the distribution of alcohol. Instead of merely limiting supply of alcohol as the politicians intended, this development caused breweries to rapidly start buying pubs in an effort to secure their ability to supply their product to thirsty consumers. Naturally, this drove up the price for pub licenses. To pay the ever-increasing amounts to acquire pubs and licenses, the mainly privately owned brewers then needed to incorporate in order to take on shareholders to raise capital to buy up these pubs. As brewers went public, they acquired more cash and debt, driving the prices for remaining pubs ever higher, the first wave of the bubble was underway.

In their book “Boom and Bust”, historians John Turner and William Quinn describe the Bubble Triangle, based on the “fire triangle” used in chemistry to label the ingredients(oxygen, fuel, heat) in starting a fire. In financial bubbles, a concept’s marketability represents oxygen. All bubbles are based on something that is at least partially or even mostly true. The Internet really did change the world, it was just that the Dotcom Bubble overshot. The financial fire’s fuel is a large supply of money and credit that keeps things burning. The fire’s heat comes from speculative fever, too much money in search of too little quality. 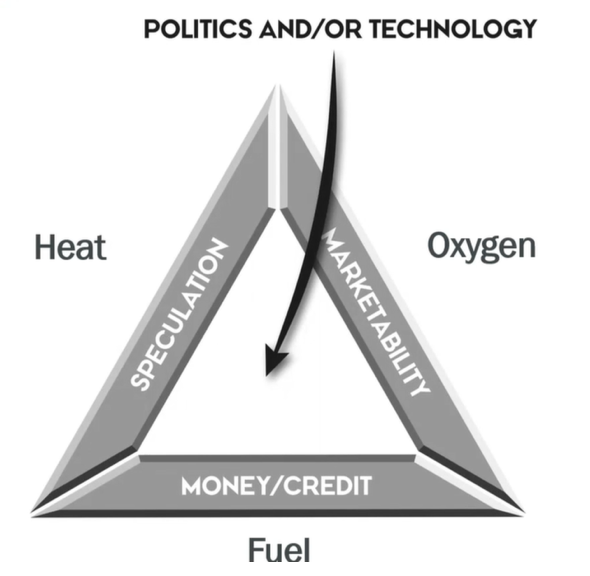 Stock market investors relished the idea of investing in breweries. Acheson, Coyle, and Turner’s research “Happy Hour Followed by a Hangover” notes that in the UK in 1885 “there were only 12 incorporated breweries with securities traded on a stock market with a total paid-up capital of about £2 million, but by 1900, there were 308 breweries, with a total paid-up capital of over £165 million.”

The main driver for listing brewery companies was to acquire shareholders’ cash and debt to put into buying pubs. So in effect, the Brewery bubble existed in three places- 1) the stock market, 2) the debt market and 3) the licensing costs, which at certain points were as much as nine times more expensive than the physical pub location itself. (The Economist reported £10,000 or even £20,000 at the height for a tied house with only  £1,000 accounting for property value). On top of this, the license did not guarantee perpetual renewal in the future.

In 1899, the Economist wrote that the enormous amount of capital sunk into buying brewery properties led to “an almost insane inflation of prices for that class of property.” Noting that the property and license price growth vastly exceeded the growth in consumption of beer, and so the day of reckoning would eventually unfold.

Meanwhile, brewery technology advanced to have refrigeration, steam, and bottling systems, but many brewers had sunk their resources into licenses. Investing in modern equipment instead could have saved them money later on and helped them serve their customers better products.

Overall the brewery's reaction to buying pubs to safeguard their future distribution channels was rational given the potential threat to their business, however, the prices paid went too far. Many breweries were small and family-run and didn’t have the capital to allocate. This fueled the leverage binge, since there was too much debt-fuelled money chasing too few licenses, prices rose with speculators riding the wave all the way through. While brewers chased higher and higher prices of tied houses, beer consumption fell from 1899 to 1909, and the stocks eventually followed suit. 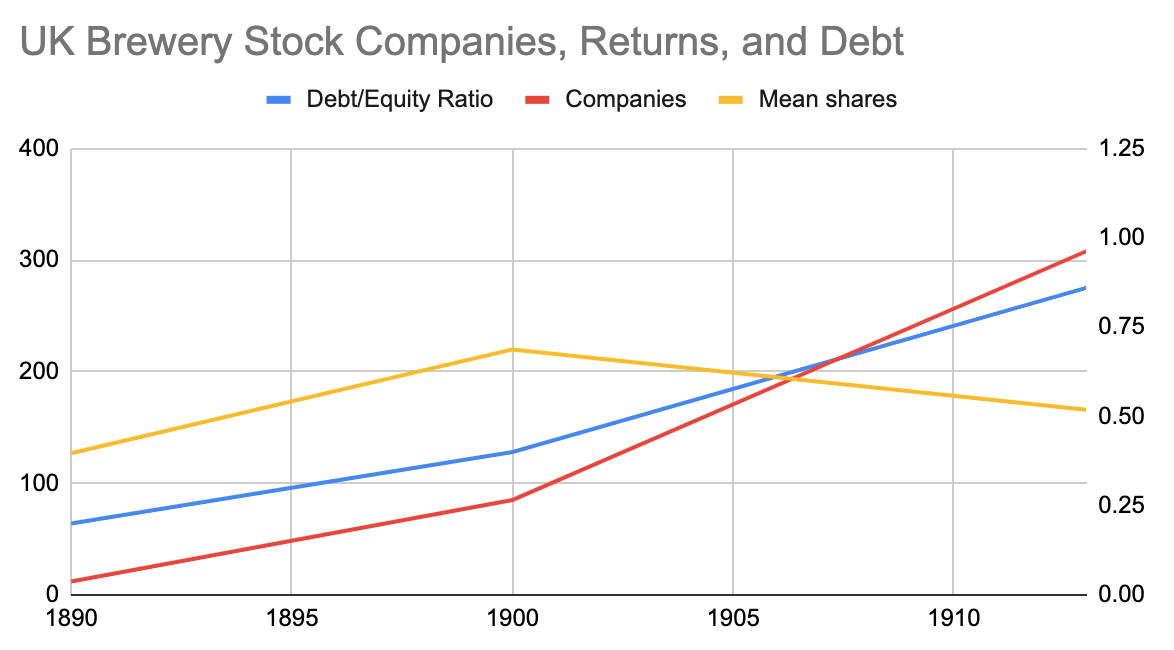 Acheson, Coyle, and Turner divide UK Brewery Bubble into two segments, first the Happy Hour from 1886-1899, where brewery stocks returned 11.2%, as the Happy Hour wound down, the high prices of pubs, licenses, and debt brought on the hangover, and from 1900-1910 the brewery companies delivered -4.5% returns. In parallel, the brewer’s mean Debt/Equity ratio soared from 0.2 in 1885 to 1.06 by 1913. The number of newly public companies, the amount of debt, and lack of growth meant only one thing: investors buying into breweries in 1900 would see their returns fizzle.

For those who would like to delve deeper into the brewery bubble, there is an academic paper written by Acheson, Coyle, and Turner as well as now a new Investor Amnesia financial history course containing details of the Brewery bubble including many more historical financial events.

Popular posts from this blog

The comically disproportioned Penny Farthing bicycles were the go-to bike in England during the early 1870s through the early 1880s. However, they were not widely used. Like the bicycles we know today; they were less for daily transportation and more of a novelty item. Penny Farthings were expensive(10 pounds), and they were extremely uncomfortable. They were so uncomfortable that the flagship model was called the “boneshaker”. On top of that the seat was so high they were hard to mount and pedal.  In 1886, John Kemp Starley made the first commercially produced bicycle of a new age of bicycles that transformed the Penny Farthing into something which closely resembles the bikes we ride today. They had a chain in order to reduce the size of the wheel and made them equal sizes. Also, they had pneumatic tires which contributed to a much smoother ride. No to mention the frame was far smaller which made them significantly easier to mount and ride. Because of these features, they received t
Read more 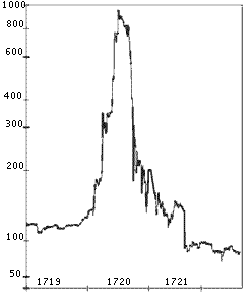 The pandemic has driven many people to fill their newfound free time with day trading and speculation in the stock market. They can yield unprecedented gains and losses. This is the side of the market which more aptly resembles gambling than the classic value investing. Like gambling, for every winner crowing about gains, there are many losers who have lost their nest egg. As a whole, this gambling activity makes share prices detach from the company's actual value. History can help guide us through this time because what may seem unprecedented events, is a phenomenon that repeats itself across centuries. The baseless speculative activities of today are similar to those in 1720 Britain where at the time the South Sea Company reigned as the stock to be traded up and down. The resemblance is uncanny to anyone who is familiar with the South Sea Bubble and our reenactment is happening almost exactly 300 years later. Bubbles are a phenomenon where people buy into an idea of something whi
Read more